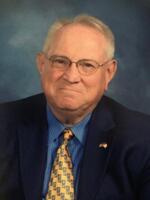 In addition to his parents he was preceded in death by one brother, Reverend Richard A. “Dick” McDonald and one brother-in-law, Bill Sharps.

Mac graduated from Grafton High School with the Class of 1964 then served in the US Navy from June 1964 to October 1968. He retired from the WV State Police with almost 21 years of service and then worked 11 years as Calhoun County Magistrate. He was called into the ministry in 2000 at the age of 54, then served the Lord as assistant pastor of the Victory Baptist Church in Calhoun County, WV, and served as Pastor of the Brooksville Baptist Church in Calhoun County from February 2004 through July 2011.
Mac and his wife, Rosemary, returned home to Taylor County and served two years as the Director of Missions in the Monongahela Association of Southern Baptists. He then joined the Beulah Baptist Church and became the interim pastor, a deacon, and adult Sunday School teacher.

He was a servant at heart and it was evident in the way he lived his life. He loved his Jesus and he loved to tell his story and share his faith. His story telling, smile, and laughter will always be remembered by all who knew him.

The family will receive friends at the Donald G. Ford Funeral Home in Grafton on Tuesday, September 22nd from 4:00-8:00 p.m.
Funeral services will be conducted at the funeral home on Wednesday, September 23, 2020 at 11:30 a.m. with Pastor David Bess and family friend, Donnie Pitts officiating.
Interment will follow at the WV National Cemetery in Grafton. Military graveside services will be conducted by the Taylor County Honor Guard and the Navy Operational Support Center from Pittsburgh, PA
Online Condolences: www.donaldgfordfuneralhome.com